The country of little gifts. 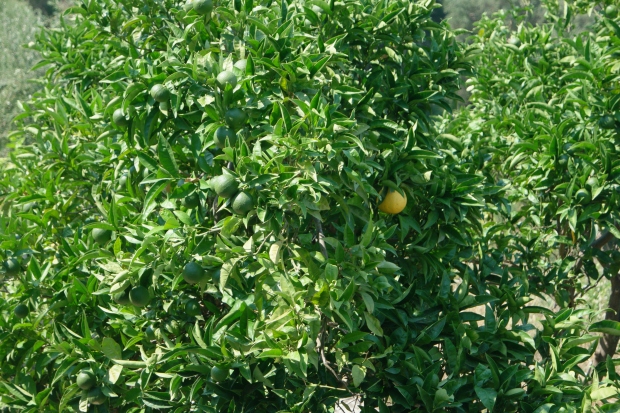 Greece, we Love YOU.

Greece was home for us and welcoming us with her sunbeams almost every morning. For us, Greece is the country of the little presents. It are those little generosities that make you feel welcome, as for example always getting water next to you meal or a little dessert from the house. On the local market people spot you and give mandarines for tasting which are of course always delicious. Or they throw some extra lemons in the bag, just as a gift.

When we did not have enough money, even big shops said “to come back next time.”At the pharmacy we met shopowner Aris who offered us nuts and raki instead of pastilles which was a good medicine for Sara-May’s itchy throat. 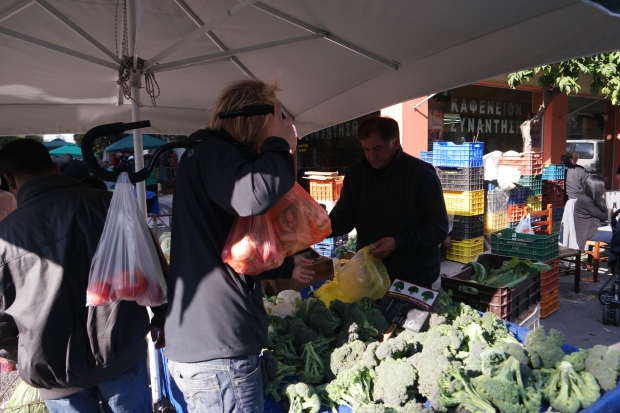 The country of big gifts

The country of little gifts also counts for Greece’s nature and environment. Then it’s even the country of big gifts, because Greece her beauty is so astonishing. Like Balos in Crete, as is shown on the picture beneath.

Although we were based primarily in Athens, also the big city has its own charmes. In the streets we get distracted by olive, lemon and orange trees that are planted everywhere. We discovered that the oranges are not for eating but it makes a nice decoration. And instead of a snowball fight, an orange fight turned out to be just as fun, a bit more painful though. In addition, we grapped lemons from the trees for our fresh fish or tea. Cats are everywhere and often they have plenty of food because the Greeks feed them well.

When Sara-May did not had to work, we explored the city and islands nearby. Aegina we visited twice. The island is famous for its tasty pistache nuts and for the house of the familiar Greek writer Niko Kazantzakis that wrote the beautiful book Zorba the Greek.

On Aegina, we practiced cycling on rocky hills, we got surrounded by 50 goats licking our salty legs, and we got invited by Elini on her farm who offered us coffee, homemade cheese, bread and olives. We hiked to a remote beach which was much further than expected and it was already getting dark. Finally to discover that we forgot the bring the lighter to make a campfire. Oops, good practice we call it.

Overal, Chris was blessed with time and knows Athens and its surroundings pretty good. Although he was addicted to the sunny balcony of our appartement in Tavros where he could practice new songs for the guitar and give the modern appartement more soul by decorating it with nice objects and palm leaves we found on the street. It made the house really cousy.

The other side of the coin

However, there is also another perspective on Greece which is different than the one which is ascribed above. As a tourist or an outsider it is easy to see Greece’s beauty, but for a longer period you are confronted with another reality: the refugee and economic crisis. To describe Greece in these two terms is very limiting, and the papers do this job already  well. However it is one of the first things Greeks mention in a conversation. In our preparation the  bike store for example had limited supplies because of the capital controls. Also getting sponsors for the equipment was more hard. People let you know that these times are financially way more hard than for example ten to five years ago. 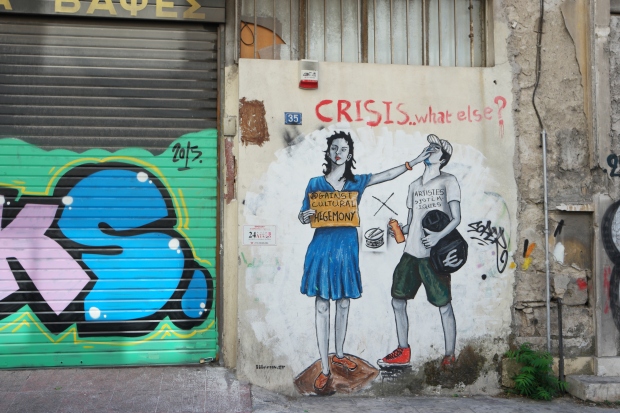 We talked to cab drivers that have to work 10 till 12 hours a day for 7 days a week, mothers that earn an average salary of 500 euro, which is also the amount of the monthly rent they have to pay. So many families live together in one appartement. Chris met a woman who had to sold her jewelry on the streets, because her shop had to be closed. We were suprised that the prices in the supermarket are more expensive than in Germany and the Netherlands. But on the other hand, who needs supermarkets if you have so many great local markets.

People mention different causes for the economic decline. The finger is pointed to bad politics and many Greek are not happy with the implementations of the EU and they blame the hardline politics of Germany. In Crete, a man replied to me when I told him I was from the Netherlands “Aaah, you are from the country of Dijsselbloem.” 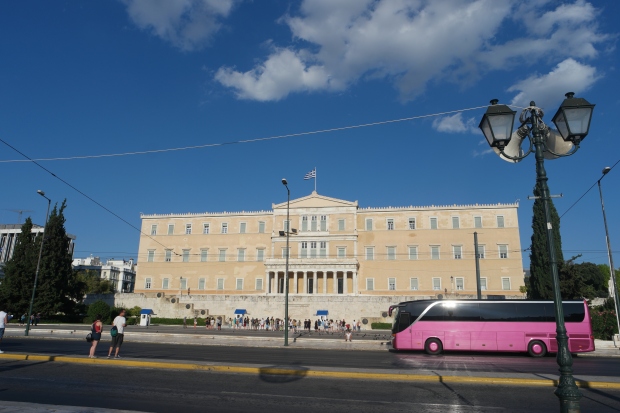 One of the best way to get an impression of people’s opinion is to talk with them. A second best way is to walk around and to pay attention to graffiti, especially in Athens, because there are so many. Lots can be found in the anarchistic area Exchargia. This area has been in the news, because of its many demonstrations and alternative subcultures and therefore some Greek people are afraid to go there. Which for us sounds a bit overexaggerated, because it is a really nice artistic area.

It is the best area to walk around and to get know alternative perspectives on the current economic, political and social situation in the country. Just already by paying attention to its walls. And it is one of the best places to go out.

But on the other hand we also met many people that reflect on the past. For example we met Alexander, a fifty year old Greek guy that said “for decades Greeks lived as kings and borrowed lots of money because it was also such an easy thing to do. Greeks have become materialistic and only caring about what they represent. And now we are going to have to pay the price for it. ” Also we met 38-year old Pedro on the streets that had the same reflections. Pedro cannot affort to travel much anymore and he feels a bit stuck because of economic circumstances. He replied to out travel plans ” you’re living life.” Although he seemed to enjoy the little things as feeding the cats and taking care of them big time.

Some people complain about other people’s mentality, but at the same time Alexander, Pedro and many others emphasize how blessed they are with the beauty of their country. This is what it makes worth staying. To end with a note of Alexander: “they did not manage to steal our sun. Yet.” As long as the sun will stay, the Greek will too.

Greece, as an European country, is getting the most refugees. The refugees are on their way to western northern countries, mainly Germany and Scandinavia. Everyday boats arrive at the harbour Piraeus with new refugees that are coming mostly from the Greek islands Kos, Chios, Lesbos, Samos, and Rhodos. From Athens they move to Thessaloniki and from there on the Balkan route to northwest. In the Internet shops at the harbour their are maps hanging on the wall how to travel to Germany. However many Balkan countries have hardenend their policies and built fences to stop the refugees of coming. So people have to find alternative ways.

In Athens we noticed the refugees in certain areas: Piraeus where they arrive with the boats. Some people decide to stay in this area, until it is more clear where they are heading to others leave straight for the north. In Victoria the refugees stay together on a square to have a sense of security. People give them bottles of water and bags, ironically from Lidle, filled with food. 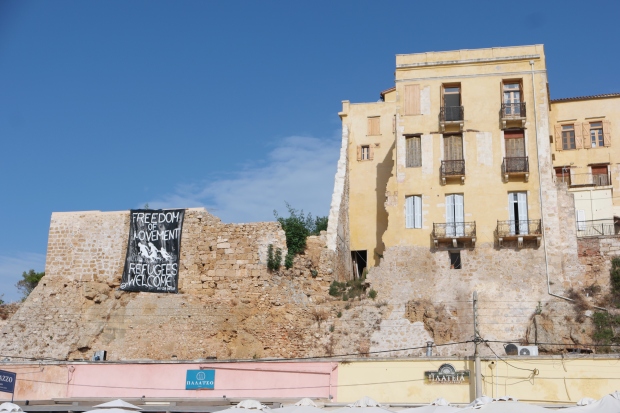 Reading the news makes us feel sad, because the public and the political mindset in Europe concerning refugees seem to have hardenend. However, where there is movement against refugees there is also a movement that welcomes them and tries to help them in their own way. For example in Exchargia, political activists from Switzerland and other countries squatted a house where they can host 40 refugees in total. The house started as an experiment, and firstly they let everybody in who knocked on the door. However now, the volunteers want to make it more homely. According to Dani an Israelian/Palestian volunteer, they decided for a maximum amount of people in the rooms. Consequently, they have to disappoint people because of the lack of beds.

There is a free shop in the house, where we could give clothes which we cannot take on the bike. People are cooking together, socializing, exchanging tips how to crack wi-fi codes, and built stuff to make the house a better place. 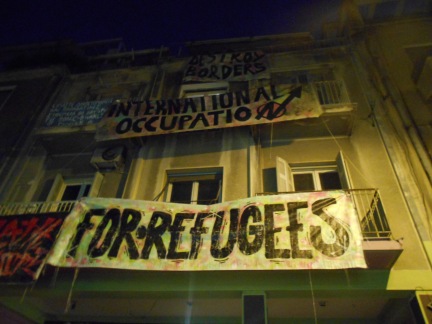 On Facebook you can find a lot of initiatives of volunteers that are trying their best to help refugees. There is the refugees welcome to Pireaus Facebook group that keeps close track of the arrival of new boats at the Athens harbour. They communicate what the refugees need and call out for helping hands and stuff that is required. These initiatives are beautiful and if people want to come and volunteer in Greece these are the places to look for.

We did not see all of Greece and therefore we decided before we go to Turkey, to first visit some of the wonderful islands of Greece and maybe help where there is a need for helping refugees. We booked a ferry to Mykonos this monday, 29th of February. It is official: we are going to leave Athens. But we will not leave Greece. Yet.

with the bicycle to India